April 9, 2019
All change at In Health Ravenswood Ipswich, with a Double Retirement and a Promotion. 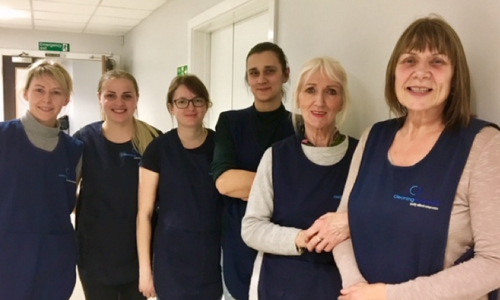 Linda our Site Supervisor at Ravenswood since 2013 retired from Cleaning Assurance on 6th March. For over 5 years Linda and her team achieved a Client feedback score of 100% on numerous occasions. In other words, a perfect 10 in all categories.

On leaving Linda commented “I enjoyed coming to work because the team was good as was the atmosphere. Cleaning Assurance is a nice company with nice people, good communication. I was treated well and would recommend us as employers. I’m sad to go”

Also, Cleaning Operative Theresa, who had worked for the Company for a year, decided to join Linda and retire on the same day.

We wish Linda and Theresa a long and happy retirement and thank them for their hard work and support during their time with the Company.

In line with our ‘promotion from within’ policy, we are delighted to announce Olga has been promoted to Site Supervisor. Olga has worked for Cleaning Assurance at the Ravenswood site since 2012.

Originally from a small-town Vilnius in Lithuania, Olga came to the UK in 2004 and is married to Edvard. We wish Olga every success in her new position.